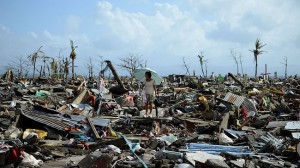 Philippine troops have killed two communist insurgents who attacked an aid convoy en route to typhoon-devastated Tacloban, the military said, as soldiers were deployed to quell looting by hungry survivors.

Bodies still littered the streets of the city, where the United Nations fears 10,000 people could have died when the category-five Haiyan struck on Friday.

Thousands of people whose homes were destroyed by one of the most powerful typhoons on record were facing yet another night of misery, many without shelter, as troops established checkpoints to try to restore order and allow much-needed aid to percolate through.

Some of that aid fell victim to one of the Philippines’ long-running insurgencies when 15 communist rebels ambushed trucks on their way to the storm-wracked region, a local commander said.

“There were no casualties on the government side,” Lieutenant Colonel Joselito Kakilala said, adding that two members of the New People’s Army, the militant wing of the Communist Party of the Philippines, were killed and another wounded in the clash in Matnog town, some 240 kilometres from Tacloban.

In the city itself, a curfew was in force as armoured vehicles and elite security forces patrolled streets where famished survivors had raided stores and ransacked other aid convoys.

Hundreds of soldiers and police were in evidence around the city, the capital of the provincial island of Leyte, which bore the brunt of Haiyan, one of the strongest storms on record.

Tacloban – a city of 220,000 residents – has been the scene of the worst pillaging. Survivors reported gangs stealing consumer goods including televisions and washing machines from small businesses.

As night fell in the ravaged city, heavily armed policemen manned checkpoints or patrolled the corpse-lined streets, on the prowl for looters.

“We are here to stop people looting properties and breaking into homes.”