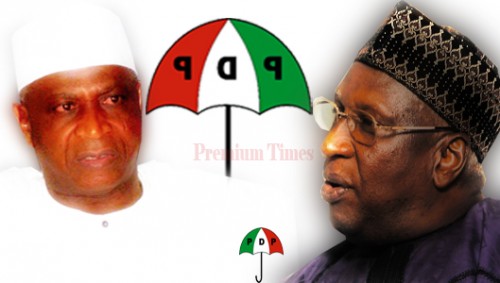 National Chairman of the Peoples’ Democratic Party, PDP, Alhaji Bamanga Tukur has told members of the Abubakar Baraje-led New PDP that he has no hand in their current travails.

With Baraje, Prince Olagunsoye Oyinlola, Dr. Sam Jaja and Ambassador Ibrahim Kazaure of the New PDP suspended from the mainstream PDP and the axe of expulsion dangling over their heads, the faction had blamed Tukur for master-minding the plot to oust them from the ruling party despite moves by President Goodluck Jonathan to resolve the crisis.

But Tukur, who spoke through his media aide, Mr. Oliver Okpala on Monday in Abuja, advised members of the New PDP against portraying him as an antagonist, who is not ready for peace, saying that the meeting between the rebel governors and Jonathan was purely an initiative of the Presidency.

He said, “It is wrong and completely unreasonable for any right thinking person to accuse Tukur of having a hand in the deadlock of the meeting because it is a presidential initiative and not an NWC affair, where Tukur presides.

“Therefore, there is no way he can get involved or frustrate such a presidential initiative. The so-called factional members should desist from insulting   the integrity of Tukur, who is a nationalist.