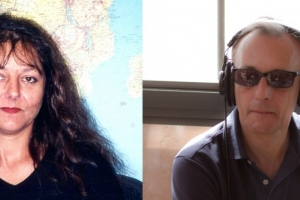 Two French journalists abducted by gunmen in the northern Mali town of Kidal have been killed, French and Malian officials say.

Ghislaine Dupont and Claude Verlon, both journalists with French radio station Radio France Internationale (RFI), were seized on Saturday afternoon after they had finished an interview with a Tuareg rebel leader when several armed men grabbed them, according to a city official.

“A few minutes after a pursuit began for the abductors of the two French, we were informed that their bodies were found riddled with bullets outside the town,” said Paul-Marie Sidibe, prefect of the town of Tinzawaten, who is based in Kidal.

A senior Tuareg official also said the bodies had been recovered outside Kidal. A Mali security source said the journalists were killed about 12km outside the town.

The executions occurred as the government is trying to talk with rebels in the north to prevent a wider conflict in the country.

The French Foreign Ministry confirmed their deaths in a statement, saying they were abducted by an armed group.

“The French government, in conjunction with the Malian authorities will make every effort to find out as soon as possible about the circumstances of their death,” said the statement.

RFI described Dupont, 51, and Verlon, 58, as professionals with long experience in challenging areas.

Dupont was a journalist who was “passionate about her job and the African continent that she covered since joining RFI in 1986”, it said in a statement.

Verlon was “used to difficult terrain throughout the world”.

Staff members “are all in shock, profoundly saddened, indignant and angry”, it said.

While it was still unclear who carried out the killing, Malian government officials pointed the finger at the Movement for the Liberation of Azawad (MNLA), a Tuareg separatist movement that is in nominal control of much of the north of Mali.

Since 2003, northern Mali has also acted as a rear base for al-Qaeda’s North African branch, which has used the country’s vast deserts north of Kidal to train fighters, amass arms and prepare for war. They have bankrolled their operations by kidnapping Westerners, especially French nationals.

Al-Qaeda in the Islamic Maghreb has carried out at least 18 successful kidnappings of foreigners in the past decade, netting at least $89m in ransom payments, according to global intelligence unit Stratfor.