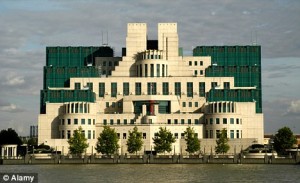 Britain’s spy chiefs defended their activities as they gave public, televised evidence to British MPs for the first time amid a fierce debate over intelligence tactics following leaks of mass spying on citizens and foreign allies.

Andrew Parker and John Sawers, the heads of Britain’s domestic agency MI5 and its foreign spy service MI6, and the director of the GCHQ, Iain Lobban, fielded questions from Parliament’s Intelligence and Security Committee on Thursday.

Parker defended his spies, and their methods. “The suggestion that somehow what we do is somehow compromising freedom and democracy – we believe the opposite to be the case,” he said.

Leaks by the US whistleblower Edward Snowden showed that British spies were involved in mass surveillance of the communications and internet activities of British citizens, hoovering up the details of tens of millions of calls and messages a month. They also spied on foreign allies and shared their information with counterparts in the United States.

“The leaks from Snowden have been very damaging, they’ve put our operations at risk. It’s clear that our adversaries are rubbing their hands with glee, al-Qaeda is lapping it up,” Sawers added.

British spy agencies have provided no information to the public how Snowden’s revelations have harmed their activities. Nor have they proved how spying on millions of British citizens, foreigners and foreign governments has given them any advantage against their adversaries.

Lobban came closest to giving a concrete example, saying that GCHQ had caught groups in the Middle East and elsewhere discussing how to switch to more secure means of communication after the Snowden leaks broke.

“I am not going to compound the damage by being specific in public,” he said, promising politicians instead a private briefing on the details.

The committee previously has taken evidence in private from the security chiefs. Their appearance on Thursday was being televised with a slight delay. [Reuters]