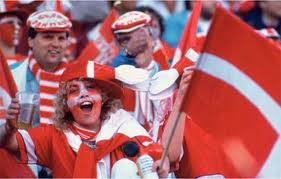 They are the most indebted people in the world, live through long, dark winters and have a shorter life expectancy than several Mediterranean countries.

Yet for the past four decades, the Danes have consistently rated themselves as the happiest people on Earth.

But then, in a country where there is an unemployment insurance in place that guarantees 80-percent wages for two years if you lose your job, what’s there not to be happy about?

Among foreigners in Denmark, theories as to why the host population is so content range from its egalitarian policies to its history to grumblings that some people are simply easier to satisfy than others.

“You can reach a high-ranking politician or a director here even if you are an ordinary person,” said Josephine Hoegh, a woman from the Philippines who moved to the Scandinavian country 40 years ago.

The Danes themselves are more puzzled by their purported happiness, sometimes referring to it facetiously when data paint a less rosy picture – like when the Organisation for Economic Cooperation and Development said they were the third-largest consumers per capita of antidepressants.

Denmark first topped the happiness table in 1973, when a European Union survey found that people there were more satisfied with life than in any other member state.

This year, it held on to the top spot in the United Nations’ annual World Happiness Report even as it suffered through the worst economic crisis of its post-World War II history.

In the study, respondents were asked to evaluate the current state of their lives using a scale of zero to 10, where a top rating signified the best possible life for them, and zero the worst.

“One of the most important things making the Danes happy is the security in Danish society,” said Meik Wiking, director of the Happiness Research Institute, a Danish think-tank aiming to improve the quality of life in Denmark and abroad.

“There is a high degree of financial security. If we lose our jobs we get support, when we fall ill we can go to the hospital, and so on,” he added.

Denmark has the highest taxes in the world as a percentage of the overall economy, but many Danes value the social security net they get in return, including subsidised childcare and unemployment insurance that guarantees 80-percent wages for two years if they lose their jobs.

The centre-left government has had to cut back on some benefits – including student grants and unemployment insurance, which used to last four years – but it still presides over one of the most generous welfare states in the world.

The second pillar of happiness is a high level of trust between people, even for a stranger on the street, according to Wiking.

This could be a spillover effect from people’s high level of trust in the government, which is underpinned by a low level of corruption.

“We have a belief that our democratic institutions protect us and that the state… wants what is good for us,” he said.

Denmark’s welfare state isn’t radically different from other Nordic countries’, but in surveys the nation scores higher than its neighbours on social relationships, another reason for being happy.

“Danish society is more cohesive. The quality of social relations is somewhat stronger” than in the rest of Scandinavia, Wiking said.

The country has a large number of clubs and associations where membership often transcends class barriers. At a chess club, a chief executive could be playing against someone working in a shop.

Other explanations for the Danes’ self-reported wellbeing can be found in history.

Denmark was a European great power between the 13th and 17th centuries. But as the country’s official website states, today its size and influence “is the result of 400 years of forced relinquishments of land, surrenders and lost battles.”

“They haven’t won anything for the last 200 years, they’ve only lost, and that’s created a mentality in Denmark of looking inward and of valuing what you have left,” said Michael Booth, a British expatriate who has written a book on his adopted Nordic home called “The Almost Nearly Perfect People”.

Danes also have a knack for denying unpalatable truths, he said.

“They have the highest level of private debt in the world… but they’re very good at putting their hands over their ears and going la-la-la,” he said.

“One aspect of that is they’re very good at forgiving public figures who transgress. Like Anders Fogh Rasmussen, the prime minister who took them into two terrible wars in Afghanistan and Iraq, and also permitted terrible economic policies.

“He’s really wrecked the economy, but you never hear a bad word said about him.”

There’s also the fact that the Danes don’t work very much, putting in an average of only 33 hours a week, according to the Rockwool Foundation.

Still, after initially hating the taxes, the weather and a “suffocating embarrassment about individual ambition and success,” Booth admitted that since becoming a parent, there was nowhere else he’d rather live.

“Denmark is, if not one of the best, maybe even the best country to have kids. Everything is geared to the family in Denmark,” he said.