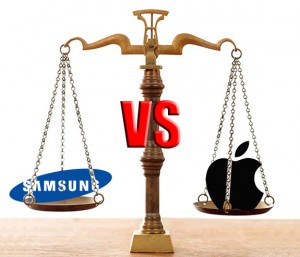 A US jury has awarded Apple Inc about $290m in a damages retrial against Samsung Electronics Co Ltd, restoring a large chunk of a landmark verdict the iPhone maker won last year.

After a week long trial, the jury deliberated for nearly two days before reaching a decision on Thursday in a San Jose, California federal court. Apple had requested $379.8m, while Samsung argued that it should have to pay $52.7m.

Apple and Samsung have been fighting in the courts for over two years. Apple was awarded over $1b last year after it convinced a jury that Samsung copied various iPhone features – like using fingers to pinch and zoom on the screen – along with design touches like the phone’s flat, black glass screen.

Earlier this year US District Judge Lucy Koh upheld nearly $640m of that verdict but ordered a retrial on the rest, ruling that the previous jury had made some errors in its calculations. Combined with the retrial verdict of $290.5m on Thursday, Apple has now been awarded $929.8m in the case.

Apple called its marketing chief Phil Schiller to testify during the trial. Samsung did not call any senior executives, a fact hammered on by Apple attorneys during closing argument.

Samsung spokeswoman Lauren Restuccia said the company is disappointed by the verdict, especially because one of the patents in the case has been recently deemed invalid by the US Patent and Trademark Office. Apple is contesting that finding.

Apple spokeswoman Kristin Huguet said it was grateful to the jury for imposing costs on Samsung, though she said the case has been more about protecting innovation than winning money.

Samsung manufactures phones that use the Android operating system, which is developed by Google.

In addition to the fight over money, Apple is seeking a permanent injunction against several older Samsung phones.

Koh had previously rejected such a sales ban, but earlier this week the US Court of Appeals for the Federal Circuit ordered her to reconsider.

Nick Rodelli, a lawyer and adviser to institutional investors for CFRA Research in Maryland, said injunctions are much more important in these legal battles than monetary awards.

Still, he said, the verdict shows that Apple’s narrative was persuasive to a second jury drawn from Silicon Valley.

“A jury award on the high end of the range is a modestly positive signal for Apple,” Rodelli said.

Colleen Allen, the jury forewoman, said Apple did not enjoy a home field advantage from having the trial so close to the iPhone maker’s headquarters in Cupertino.

Both companies are global players, she said, and while Apple engineers may be based in Northern California, its products are manufactured overseas.

The jurors based their decision on the evidence, said Allen, a 36-year old nurse.

The case is likely to drag on as Samsung appeals both verdicts, said Brian Love, a professor at Santa Clara Law in Silicon Valley.

“Litigation between the parties is far from over, and there is no end in sight,” Love said.