Now when the Syrian civil war is into its third year, more than 2,1 million people have fled their country to the neighboring states, half a million – to Jordan. About 100,000 live in Zaatari camp –  one of the largest refugee camps in the world. 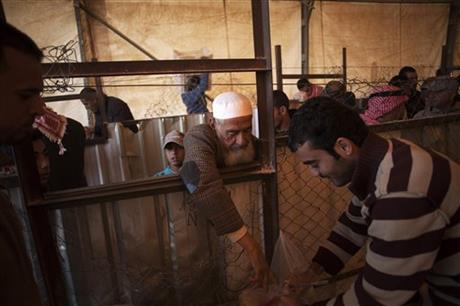 The manager of the camp arranges toy figurines, trucks and houses on a map to illustrate his ambitious vision to turn the chaotic shantytown of 100,000 into a city with local councils, paved streets, parks, and proper electricity and sewage.

Refugees in Zaatari are already increasing putting down roots, creating an elaborate camp economy in a tough, enclosed world.

Here’s a look at the camp in numbers, provided by the United Nations refugee agency:

The neighboring countries receive 97 per cent of the Syrian refugees. Their leaders have asked international community for assistance in dealing with an ever increasing number of refugees. As of end August the number of people fleeing the war in Syria reached 110,000 in Egypt, 168,000 in Iraq, 460,000 in Turkey. Lebanon has received the biggest amount of refugees so far – 716,000.