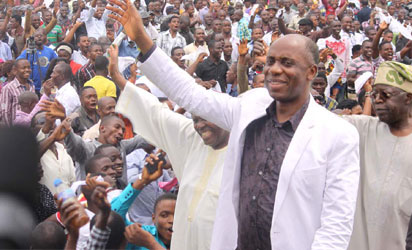 Rivers State governor, Chibuike Rotimi Amaechi has justified his decision to join the All Progressives Congress, APC, saying the interests of the oil-rich state were no longer being protected in the Peoples’ Democratic Party, PDP.

He also said he defected because President Goodluck Jonathan failed to address issues raised by the G-7 governors.

Amaechi, who spoke Wednesday at the Port Harcourt international airport, Omagwa assured that the APC would protect the interest of all Rivers state people, especially regarding the transfer of oil wells belonging to the state to other states.

“Rivers State must know that for me to have taken that decision, I had looked at the general interests of Rivers people. I was not elected to lead Nigeria, I was elected to lead Rivers State and I had looked at the interests of Rivers people and have seen that these interests were not protected in PDP. I have seen the fact that we are losing our oil wells in Etche, in the Kalabari areas and that the more they continue to pilfer these oil wells, the more we will continue to lose our wealth”, he said

The governor while stressing that he did not join APC to further his personal interests or spite the president, denied any face off with Mr. Jonathan.