Samuel Eto’o has alleged that some of his team mates are conspiring against him ahead of the playoff against Tunisia. 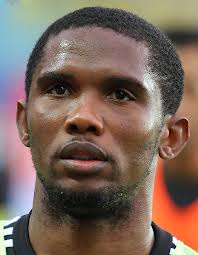 Cameroon host Tunisia on Sunday at the Ahmadou Ahidjo Stadium in Yaoundé in a 2014 FIFA World Cup final leg play-off with the scores 0-0 from the first leg.

The Indomitable Lions’ skipper made the allegations on Wednesday during a press conference that he attended together with Coach Volker Finke alongside vice-captains Nicolas Nkoulou and Enoh Eyong.

The Chelsea striker said rumours of a conspiracy against him by some of his teammates are true and alleged that instructions had been issued not to pass the ball to him whenever he is in a good scoring position.

“It is sad to say but it is true. And as the coach is present, I am asking him to make sure it does not happen anymore in our national team. If we were not about to play such a crucial game, I would have asked you to have a look at some of the matches yourselves,” Eto’o said.

And Eto’o went on to explain why he had played so often out of position during the first leg in Radès.

“If I moved back so much towards the midfield against Tunisia, it is before I knew about it already. I had to play like that and I did it, but on Sunday we are talking about Cameroon, about our country. We must put our problems behind us and play for Cameroon,” Eto’o said.