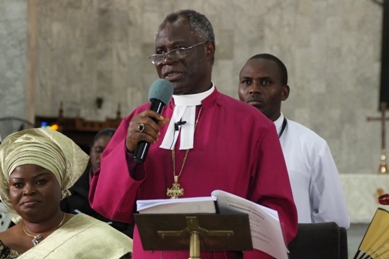 Nigeria is a country built on deceit, the retired Bishop of the Church of Nigeria (Anglican Communion), Lagos-West Diocese, Rt. Rev. Peter Adebiyi, has said.

He hinged this belief on several indicators which show that the various nationalities in the country are living together under duress. He said this was evident in the high level of religious intolerance being experienced, which was reflected in politics.

Adebiyi, who made this known at a conference on the state of the nation in Lagos on Saturday, said it would be suicidal for him to walk in some places in the North dressed in his priest robes without being attacked for being a Christian.

He identified the born-to-rule mentality of some northerners as one of the major causes of the crises in the country.

“An average northerner believes that he was born to rule Nigeria and that is the essence of the conference we are talking about,” he said.

Adebiyi aded, “Sometime, when I see people speak about one Nigeria, I remain silent because I know that Nigeria is not one. We have an agglomeration of nations in Nigeria. I will only go to where I’ll be tolerated.

“It is only those who are after money; those who are selfish that say we are a country. How do I call where I’m not wanted my own? Everything is a deceit; Nigeria is a country of great deceit.

“It is time for every one of us, if this conference is real, to say that ‘this is what we want.’ If we cannot live together, why can’t I go home? What is wrong, if I say I’m going home?”

He laid the blame for the failure of the country’s anti-graft agencies on the doorsteps of the government, who he accused of lacking the political will to fight corruption.

For instance, Adebiyi explained that it would be difficult for the head of an anti-graft agency appointed by the President to thoroughly investigate the President if indicted of corruption.

The bishop said, “I was a member of the Code of Conduct Bureau at its inception in 1988; eleven of us were members. I was there for 20 years until few years ago. I cannot say what my eyes saw. At a point, the bureau became a god that cannot bite because the setup was good but the operating value was bad.”