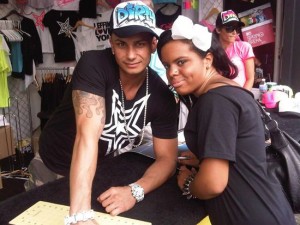 Vanessa Sky Ellis has dedicated her entire life to taking photos of herself with famous people. She spends up to 12 hours a day hunting for celebrities around her hometown of New York and has so far collected a whopping 10,000 photographs with stars like Lady Gaga, Johnny Depp and Cher.

The 26-year-old barmaid says her hobby of photographing herself with A-list celebrities is “the most important thing in her life” and spends hours on end stalking stars around the city just to take their picture. Among her many “victims” are famous actors and singers such as Jonny Depp, Brad Pitt, Sharon Osbourne, Lady Gaga, Mariah Carrey, Al Pacino, Denzel Washingon. Her favorite picture is of “Pirates of the Caribbean” actor Johnny Depp who she finds very attractive. “Johnny Depp is the most handsome man ever – he might be 50 but he’s beautiful,” she confesses. “I’ve never considered cheating on my boyfriend with a celebrity, but if you had the chance with Johnny Depp what girl wouldn’t?” Vanessa also likes Lady Gaga, as the “Bad Romance” singer is always nice enough to stop to chat and take pictures with her little monsters. Celebs like Bruce Willis, who never stops for the pleading admirers, are her least favorite.

Although she had always been a big celeb fan, her obsession with Hollywood stars worsened after her mother – who had the same hobby – died of a heart attack in 2007.  “I feel like I need to continue getting celebrities just the same way that my mom did,” Vanessa says.  Although she has a full time job as a barmaid, Ellis spends all her free time waiting around the city looking for famous faces. “I’ve waited outside hotels for celebrities to come out for 12 hours before – but there’s no better feeling than when you meet them,” the star-obsessed woman states.

One time she waited outside a hotel 12 hours for Vanilla Ice and followed Cher around the city for a week before to get the coveted photo. Now, the famous “Walking in Memphis” singer even knows her name. “Sometimes you just have to go with just two hours sleep, but you know what, you’re still doing what you love,” Vanessa says. And even if other celeb enthusiasts say her determination to collect these pictures is a bit extreme, the young woman says she doesn’t think she will ever stop “getting celebrities.”