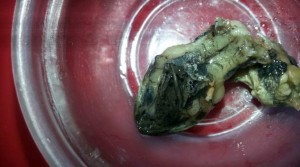 When a Gladstone, Oregon mother was preparing dinner for her family, she made a stomach turning discovery. Misty Moser poured out the remaining contents of a half-eaten bag of frozen Kroger Value brand green beans and her sister saw something strange. What at first appeared to be a clump of green bean stems, when defrosted with some cold water, turned out to be a snake head.

Misty told KOIN 6 News, “It started to kind of unfold. It was in a little ball and I noticed it had a mouth, and nostrils, and little tiny eyes. Not what I had thought I was buying.” Understandably, the Oregonian was unsettled and told KPTV Fox 12, “I started panicking, and I actually had to ask everybody, ‘What does this look like to you?’ Because I could not believe it was a snake head.”

Ms. Moser called the phone number on the bag she bought at the Fred Meyer store in Oak Grove to complain about her find. KGW NewsChannel 8 spoke to Misty about her experience with the customer service representative who she felt did not take her seriously. “That’s a snake in green beans. It’s not like a stick or a rock. It’s an animal. And she’s like, ‘Well, nobody was injured and nobody got sick from it so our hands are tied.’”

According to KPTV’s report, the phone representative took Misty’s name and the bag’s serial number, then instructed the customer to throw everything away. Then the rep offered Misty a $15 Fred Meyer coupon, but when the customer asked to speak to a supervisor, she was told that the coupon would be taken back and her concerns would be sent to the claims department.

Melinda Merrill, a Fred Meyer public affairs representative, apologized to Misty and told KGW, “It should have been handled with a lot more concern than that. I mean we have a process for products that are questionable or damaged.” That process is for the customer to be referred to the Kroger owned Fred Meyer store where the questionable product was purchased so that a report could be filed. The store is investigating the incident so that it is not repeated and is asking that Misty bring the bag and the snake head to the Oak Grove store so it could be inspected.

It appears that the incident has affected the family. Misty doesn’t plan on serving green beans again and her 6-year-old daughter Kailyn says she’s only going to eat pizza and fruit.