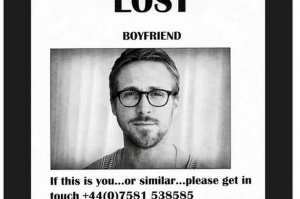 A woman has put up posters appealing for her ‘lost boyfriend’ to return to her – which feature a photo of Hollywood actor Ryan Gosling.

Known only by her first name, Isabella, the woman has erected a number of the signs around London which implore her absent beau to return to her.

The posters read: “LOST boyfriend,” above a photograph of Gosling, “if this is you… or similar… please get in touch.”

The appeal includes a phone number for Isabella which goes straight to voicemail – featuring a recorded message.

It says: “Hi this is Isabella, if you think you are my lost boyfriend just leave a message and I’ll get back to you as soon as I can, thanks, bye.”

There is even a Twitter account which the public can use to chart her progress in finding her boyfriend, the Metro reports.

BBC presenter Jeremy Vine posted a picture of one of the posters on Twitter saying: “Here in Chiswick a fairly desperate appeal.”