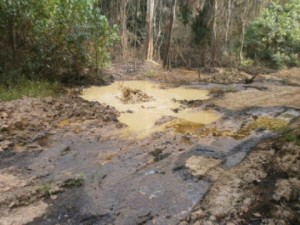 Youths of Kolo Creek, in Ogbia Local Government Area of Bayelsa State, weekend, threatened to disrupt the operations of Shell Petroleum Development Company in the area over the deplorable state of Imiringi-Edepie Road.

The youths noted with sadness that though the oil company had been in operation in the area for over 40 years, it had neglected the natives of the community and watched the road turn into death trap over the years.

The youths, led by the youth President of Kolo Creek Community, Mr. Victor Otobo, at a town hall meeting organised by the state Public Information Management Committee, said the youths and women in the community had concluded plans to stage a peaceful protest to register their displeasure over what they described as the neglect of the community.

Otobo said that the protest was to send a clear message to the state government and Shell that the community had been plunged into darkness in the last three months and had no road.

Earlier in his presentation, the Chairman of the Public Information Management Committee and Special Adviser to the Governor on Social Media, Mr. Boma Spero-Jack, in his presentation titled Using Official Channels of Communication To Promote Good Governance in Bayelsa State, described Ogbia council as a fortunate land where the first oil well was discovered in large quantity at Oloibiri, in 1956.

He assured the youths that the outcome of the interactive session would be presented to Governor Dickson, adding that the state government was working tirelessly to revamp the ailing state Plastic Industry and Oil Palm Industry. [Vanguard]