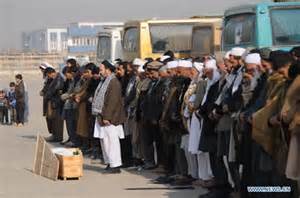 A suicide bombing at the funeral of an Iraqi anti-Qaeda fighter has killed 12 people and injured 45 others.

The attack came as figures released on Sunday showed that nearly 950 people died last month in violence across the country.

Three bombs went off at the funeral of an anti-al-Qaeda fighter who had been killed on Saturday near the confessionally mixed city of Baquba.

The blasts went off at the graveyard in the village of Wajihiya where the funeral procession, which included relatives and tribesmen, for Mudher al-Shallal al-Araki had planned to bury the 27-year-old.

As of late 2006, the Sahwa began siding with US forces against al-Qaeda, helping turn the tide of Iraq’s insurgency. Sunni fighters linked to al-Qaeda regard them as traitors and often target them for attacks.

Police also discovered the bodies of 18 men on Friday, including a Sunni tribal sheikh and his son, who had been abducted and shot in the head near Baghdad. A senior security official said the attack bore the hallmarks of al-Qaeda.

The bloodshed was the latest in a months-long spike in violence that has left 948 people dead. Of that, 852 civilians, 53 policemen and 43 soldiers were killed, while 1,349 others were wounded.