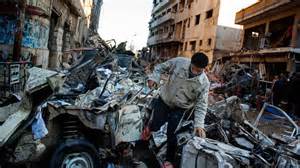 No fewer than 15 people were killed and 150 injured, in a powerful car bomb explosion that rocked a police headquarters in the Egyptian city north of Cairo, officials said.

An interim government spokesman on Tuesday accused the Muslim Brotherhood of orchestrating the attack in Mansoura and branded it a “terrorist organisation.”

The bombing set off angry protests in Mansoura on Tuesday afternoon, with hundreds of people attacking a business establishment and setting on fire two vans reportedly owned by the Muslim Brotherhood.

Earlier, the Brotherhood condemned the blast in an emailed statement.

“The Muslim Brotherhood considers this act as a direct attack on the unity of the Egyptian people and demands an enquiry forthwith so that the perpetrators of this crime may be brought to justice,” the statement said.

Egypt’s interior ministry said preliminary investigations show it was a suicide bomber, driving a car loaded with explosives, who rammed through the barricades around the police station and then detonated the car.

The Prime Minister Hazem el-Beblawi described the attack as a “terrorist incident,” and vowed that the perpetrators “will not escape justice.”

“The incident we saw was the most heinous form of terrorism,” Beblawi said.

Mohamed Ibrahim, Egypt’s Interior Minister, said four people have been arrested after admitting their involvement to the incident.

“The attacks are an attempt to create a diversion and to terrorise people because of the referendum,” he said. “But I want to reassure people that there is a plan in place, in cooperation with the armed forces to protect all of the election centers at the highest level.”

Sections of the five storey building in the Nile Delta city of Mansoura collapsed after the blast early on Tuesday and police evacuated surrounding buildings.

The bombing comes weeks before Egypt is to hold a referendum on a new constitution, billed by the army-backed government as the first step towards democracy since the military toppled former president Mohamed Morsi in July.

The interior ministry said a police van with 15 policemen inside, that was parked beside the building, was destroyed. Four bodies were pulled out of the blazing vehicles and rescuers were searching for others inside.

No group claimed responsibility for the attack.

Omar al-Shawatsi, the governor of Dakhalya, of which Mansoura is the capital, told state media all of the casualties were police.

“The explosion was caused by a car bomb,” Shawatsi said.

The impact of the explosion was felt around 20 kilometres away and shattered the windows of nearby buildings, security sources said.

The Daqahleya region’s head of security, Sami El-Mihi, was wounded in the blast and two of his aides were killed, security sources said.