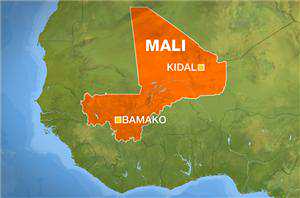 The UN peacekeeping mission in Mali has confirmed the deaths of two of its soldiers, who were killed in a car bomb while guarding a bank.

The bank which is the only one operating in the northern Malian town of Kidal was destroyed.

No one has claimed responsibility for Saturday’s attack on the Malian Solidarity Bank, which was being guarded by Mali’s army and the UN peacekeeping mission known as MINUSMA.

The attack came one day before a second round of parliamentary elections.

Condemning the attack in a statement, MINUSMA said; “A car bomb targetted MINUSMA forces and the Malian army who were guarding the building of the Malian Solidarity Bank in the centre of Kidal

“The explosion caused the death of two Senegalese blue helmets and also caused a number of serious injuries among the ranks of the Malian national guard and MINUSMA,” the statement added.

A military source said MINUSMA troops were guarding the outside of the bank while the Malians protected the inside.

“A vehicle in front of the bank is in flames after the explosion. There is a huge amount of black smoke in the sky hanging over the town,” resident Ibrahim Maiga said.  Another  resident, Youssouf Toure, said the bank was reduced to rubble.

It was not clear whether the bank was open for business at the time.

The Tuareg rebels, who demand an independent homeland they call Azawad, ended a five-month ceasefire on November 29, a day after Malian troops clashed with stone-throwing protesters who blocked a visit by the prime minister to Kidal.

The French-led offensive scattered armed groups across Mali and into neighbouring countries but the groups have stepped up operations in recent months, attacking UN peacekeepers and killing two French journalists in Kidal last month.