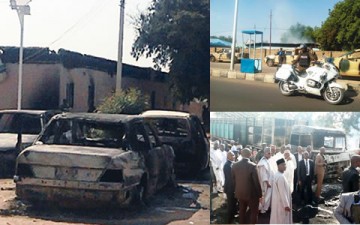 The National Emergency Management Agency, North East Zone, on Wednesday confirmed that 300 people were displaced during the Dec. 1 insurgent attack at some military formations in Maiduguri.

The confirmation is contained in a statement signed by Information Officer of the agency, Mr Abdulkadir Ibrahim, and made available to News Agency of Nigeria (NAN) in Yola.

“NEMA has carried out assessment on the victims of recent attack at the 33 Artillery barrack in Maiduguri.

“After the assessment, 300 people were confirmed internally displaced and emergency relief materials like beds, blankets and mosquito nets have been given to them.

“The victims had their residential buildings destroyed in the attack,” Ibrahim said.

The officer said that the gesture was in fulfilment of the agency’s mandate of providing succour to victims of attacks. (NAN)