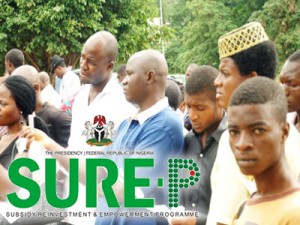 A total of 3,500 people in Oyo State have been empowered under the Subsidy Re-investment and Empowerment Programme (SURE-P) project.

Launching the programme in Ibadan yesterday, President Jonathan through the Minister of Labour and Productivity, Chief Emeka Wogu, noted that those who benefited from the project comprised 1,982 males and 1,518 females, with all the beneficiaries of the project currently working in 144 service units spread across all the 33 local government areas of the state.

He stated further that the beneficiaries had received a total of N246.8 million as stipends, while a total sum of N29.9 million had been remitted to the state as running/management cost between February and September 2013.

Governor Abiola Ajimobi, while receiving the minister said, “when you look at a state with about 10 million population and we are saying only 1,000 or 2,000 people have benefited, to me, this is terribly low.”

The governor also advised that such a life-transforming programme should be done without any political consideration.

According to him, if the Peoples Democratic Party-led Federal Government discriminates against other political parties in the management of SURE-P, its aims would be defeated. Consequently, he called for the setting up of a committee comprising representatives of both the Federal Government and state governments in each of the 36 states of the federation that would run the programme.

He also said that such committee, if constituted, would ensure synergy between the Federal Government and the state government on the SURE-P scheme and other similar empowerment and poverty alleviation programmes of the states.

“I also like to suggest that we have synergy. When I say synergy, I do not so much like the idea of SURE-P being managed without having a committee of SURE-P with that of the state government that will regularly meet and monitor progress,” the governor said.

“What I will, therefore, like to suggest is that if we can quickly increase our rate of penetration and impact, and the quantum of participants, it will be better,” Governor Ajimobi said.