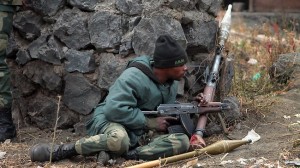 Heavy gunfire has erupted in several parts of the Democratic Republic of Congo’s capital Kinshasa, where the government said 40 assailants were killed by security forces.

The shooting erupted at the international airport and a military headquarters, causing panic among residents, while police said armed youths had taken hostage several reporters from the state television station RTNC.

Government spokesman Lambert Mende told AFP that 16 of the attackers had been killed at the airport, 16 at the general staff headquarters and eight more at the RTNC premises.

“No civilian casualties have been reported and no victims in the security forces,” Mr Mende said, adding that the assailants had yet to be identified.

In a televised message, he said the “aggression” was aimed at terrorising citizens.

The US embassy stated that it had “received multiple reports of armed engagements and fighting around Kinshasa”, together with reports of numerous military and police checkpoints and barricades.

“The embassy urges all US citizens in Kinshasa to stay in place and not travel around the city until further notice,” it said in a statement on its website.

“There’s panic in the city, people are asking what is happening,” a local resident said after the unrest began, adding that he had seen police and military officers deploy around the RTNC building and the nearby parliament premises.

Shooting was heard near the Tshatshi military camp as well as the international airport at Ndjili, residents and a local journalist said.

Traffic was slowed down and security forces were restricting the movements of civilians in some districts.

A smell of gunpowder hung in the air, the reporter said.

A police spokesman said earlier that journalists at state broadcaster RTNC had been taken hostage by armed youths, and the television feed was temporarily cut.

“They are armed with machetes and guns. They have taken reporters hostage. An operation is under way to dislodge them,” spokesman Colonel Mwana Mputu said.

Before the station’s television feed was cut, two young presenters were seen on screen, appearing frightened but calm, with a young man standing behind them seemingly threatening them.

“We don’t have the impression that the attackers had any other objective – in such small numbers, with such weak weaponry – but to seek… to spread panic and terror on the eve of the New Year’s festivities,” Mr Mende said once the television link was restored.

He asked residents to resume their normal activities and not to worry about the security deployment.

The DR Congo is a vast country rich in a wide range of minerals, where eastern provinces have been in turmoil since even before Kabila took office in wartime in January 2001, following the assassination of his father, Laurent-Desire.

Monday’s unrest comes the month after the national army, or FARDC, achieved a rare and striking military success in the strife-torn eastern North Kivu province over a powerful armed movement, the M23, which surrendered in neighbouring Uganda.

The western capital has by contrast remained relatively calm, apart from an apparent coup bid in 2003 blamed by police on troops loyal to ousted dictator Mobutu Sese Seko, who was overthrown by Laurent-Desire Kabila in 1997. The uprising was rapidly quashed.

A second coup bid attributed to renegade forces in the presidential guard took place in June 2004, but was also swiftly put down, according to the government and the large UN mission in the troubled country.

The main persistent source of trouble in Kinshasa comes from gangs of unemployed armed youths known as “kuluna” who murder, rob and assault residents of the city. Kinshasa police on November 15 launched a three-month operation to tackle these bandits, raising UN complaints of summary executions. [AFP]