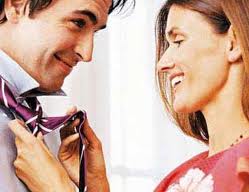 1. Don’t Fear The Damsel In Distress Act
“Whenever I want a guy to do something, I put the sweet on and act innocent. I’ll do just about everything except bat my eyelashes — but it works! Even though I’m not naïve, I’ll act that way and put a little extra sugar on everything I say and do toward him,” says Erin.

2. Bring Backup
“My boyfriend loves surprises (even though he’d never admit that), so I always come prepared. If I want him to go out with me and my girlfriends one night, or if I want him to help me clean the apartment, I make sure to stop and pick up something that he’ll really love — or something that he’s been hinting that he wants. There’s no arguments, no huffing and puffing — just a little surprise and then he’s in my pocket,” says Lisa, “Seriously, it doesn’t get any easier than that.”

3. Make Him Think The Idea Was His
“My mom let me in on a secret when my husband and I first started dating. She said that the best way to get through anything was to make him think it was his idea. You’ve got to be coy, but whenever I want Jed to do something,” says Hannah, “I make sure he thinks he came up with it — even if he knows he didn’t. The fact that I’m conceding (and letting him think he’s won) is the best way to get through everything.”

4. Go Old School
“Call me crazy, but I just ask nicely — like, really, really nicely. If my guy knows that it’s important to me, I just tell him how important it is and then I promise to make it up to him afterward,” Tara says, “How could a guy say no to that?”

5. Kill ‘Em With Kindness
“Oh,” says Morgan, “I make sure to butter him up well before I ask him to do anything. So it doesn’t look too obvious, I’ll start much earlier in the day and just make him feel really good about himself. Then, when he’s all buttered up, I’ll let him know that we’re going to spend the weekend with my parents! How could a guy get pissed at a girl who’s just spent the whole day giving him what he wants?”

6. Lean In… For A K¡ss
“There’s nothing sweeter than a long kiss before asking for something,” Meagan jokes, “It’s kind of my way of saying ‘Yes, I need something from you, but I’m not gonna fight you for it.’ I think a guy can appreciate that — and uh, who doesn’t love a hot, steamy k¡ss?”

7. Give One, Get One
“I go first,” Brittany says. “I’ll make dinner for my boyfriend and then he’ll take the lead and clean up — without me having to nag. Or I’ll buy him dinner and then the next time we go out for a date, he picks up the check. I think by seeing me take the initiative first, he’s more likely to realize that he wants to do something nice in return. It’s give one, get one, but for relationships, ha!”