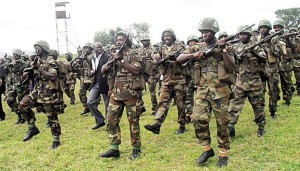 The Joint Task Force in the Niger Delta, code-named Operation Pulo Shield, said yesterday it killed 82 sea pirates and robbers, lost three of its operatives in active service in 2013 to sea pirates, while three others got drowned.

Speaking to journalists in Yenegoa on the task force’s operations in the last one year, Commander of JTF, Major-General Bata Debiro also said its operatives killed 23 kidnappers and conducted 1,025 anti-illegal oil bunkering patrols leading to the destruction of 1,951 illegal refinery camps in the region and arrest of 1,857 crude oil thieves.

Major-General Debiro said the mandate of the task force was to stop illegal bunkering activities in the upstream sector, protect oil and gas facilities and installations, secure the environment and other lawful activities in the region.

According to the JTF commander, three of its soldiers were killed by sea pirates at Andoni, Rivers State, while three others drowned in a river near Akassa in Bayelsa State.

”Over 42 armed robbers were killed and a total of 183 suspects were arrested, 40 sea pirates were also killed, 41 arrested and all manners of assorted arms and ammunition recovered from January to date,” he said.