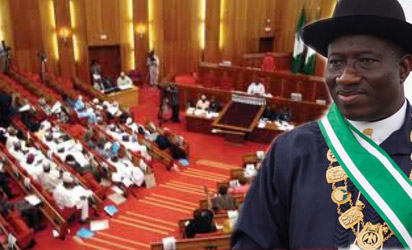 The Alliance for Democracy (AD) on Monday expressed its disapproval to the call for President Goodluck Jonathan’s impeachment.

This is contained in a statement signed by its National Secretary, Rafiu Salau, made available to News Agency of Nigeria, (NAN) in Abuja.

According to the statement, an attempt to impeach the President is disrespect to the electorate who voted him into office.

It added that political parties should sensitise the electorate on their manifestoes as tools to getting the people’s mandate during any election.

The statement further called on the National Assembly to ignore such agitation for the impeachment of the president.

NAN recalls the Interim National Publicity Secretary of All Progressives Congress had in a statement called on the National Assembly to impeach the President.

Meanwhile, Salau has said that the recent defection of 37 federal legislators from PDP to APC is normal in a democracy, provided that due process is adhered to.

“Whatever the constitution says should prevail on the defection of the 37 Federal legislators”, he told NAN in an interview.

“It is not compulsory that a single party must have the legislative and executive organs of government or there should be a single party.

“What is important is that electorate must be the one to decide who constitutes majority at the two organs of government”, he said. (NAN)