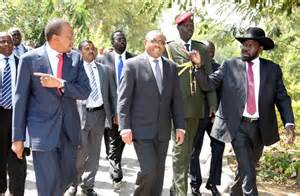 African leaders have arrived in South Sudan to try to mediate between the country’s president and his former deputy whom he accuses of attempting a coup that the government says sparked violence threatening to destroy the country.

Information Minister Michael Makuei Leuth said the government has not yet established formal contact with Machar.

“For us, we are not talking with him,” Leuth said, referring to Machar, whose whereabouts remain unknown.

Government troops are trying to retake control of Bentiu, the capital of Unity state, from forces loyal to Machar. There was reported fighting overnight in Malakal, the capital of Upper Nile state, according to Lueth.

Upper Nile and Unity comprise the country’s key oil-producing region, raising fears unrest there could cut off the country’s economic lifeline. South Sudan gets nearly 99 percent of its government budget from oil revenues.

“We are moving toward them and we will flush them out like we did in Bor,” Leuth said, referring to the capital of Jonglei state that government troops retook from renegade forces earlier in the week.

World leaders have urged the country’s leaders to stop the violence in which thousands are feared killed. The United States, Norway and Ethiopia are leading efforts to open peace talks between Kiir and his political rivals.

The United Nations has urged rival forces in South Sudan to lay down their arms, saying it will send more peacekeepers within the next 48 hours.

In a statement published on the Chinese Foreign Ministry website on Thursday, Foreign Minister Wang Yi said China will soon dispatch a special envoy to South Sudan to make contact with all sides.

President Kiir said in a Christmas address that he is willing to hold “dialogue” with all his opponents.

The UN is investigating reports of mass killings since violence began spreading across South Sudan after a fight among the presidential guards on December 15, pitting soldiers from Kiir’s Dinka ethnic group against those from the Nuer ethnic group of Machar.

South Sudan peacefully broke away from Sudan in 2011 following a 2005 peace deal. Before that, the south fought decades of war with Sudan.