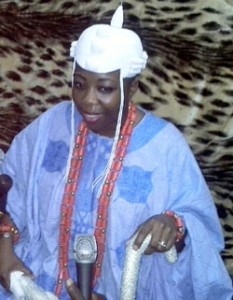 Akure, the Ondo State capital yesterday got a new leader as a new regent, Princes Adetutu Adesida Ojei was installed to fill the stool of the Deji of Akure which became vacant on December 1, this year, following the death of Oba Adebiyi Adesida, who reigned for three years and three months.

After the installation, Princes Ojei assured all sons and daughters of Akure that she was ready for the big task ahead with God on her side.

Princes Ojei, a pharmacist based in the United Kingdom is the first female child of the late Oba Adesida.

Speaking with newsmen after her installation, the regent said it was a privilege to step into her father’s shoes.

She, however, promised to continue where her father stopped in his effort to bring development to the town.

The regent said it was an open secret that the development witnessed during her father’s short reign was unprecedented in the history of the town.

“I promise that during my short reign I will bring further development to Akureland. We are all witnesses to what happened during my father’s reign.

“Akureland witnessed unprecedented development and I will, by the special grace of God, do more.

She pleaded with the kingmakers to seek the face of God in their selection of a new oba for the town, adding that they should hasten the selection process to enable her continue with her life after the selection and installation of another oba.

Meanwhile, the family of Olori Bolanle (now late), the battered wife of Prince Oluwadare Adesina, the Oba who was deposed before the deceased king was crowned, has appealed to the state government and the council of chiefs in Akure to consider his reinstatement appeal.

Prince Adesina had last week appealed to the Ondo State government to reinstate him, after apologising and saying most of the allegations against him were false, an appeal the government dismissed.

The deposed monarch was removed and banished on June 10, 2010 by the state government, after he was accused of battery on May 30, 2010.

But the family of High Chief Ojumu Fadeyi of Owo, from where the late Olori Bolanle came from, in a statement said both families have since reconciled and viewed the incident of 2010 as blown out of proportion.

According to the statement, signed by the Head of the family, Chief Akinola Fadeyi and its Secretary, Mr. Olanrewaju Fadeyi, the family said it was aware of the letter written to the state government by Adesina and agreed with the content of the letter pleading for his reinstatement as the Deji of Akure.

“We are particularly touched by the frank, honest and humble content of the said letter.

“We are more touched by the gestures of forgiveness, godliness and love extended to our daughter even in her death and the dignity with which her memory has been treated by her husband.

“Our family has considered all the issues that ensued before, during and after the deposition and banishment of our in-law, Oba Oluwadare Adepoju Adesina, and we, by this forum (as we had done on many occasions before), appeal to Governor Olusegun Mimiko and the good people of Akure to please consider the appeal of our in-law.

“We have since reconciled our differences and it is our belief that rescinding the orders of deposition and banishments would be more in tandem with the wishes of our late daughter – Olori Bolanle Adesina nee Fadeyi – who practically went about pleading with all that mattered for her husband’s reinstatement before her death.

“It is our belief that reinstating our in-law to his position as the Deji of Akure will be a rare honour done to our family and the memory of our late daughter,” the statement said.