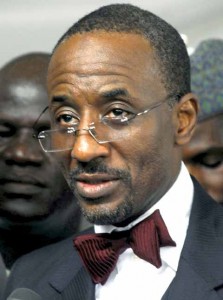 Governor of Central Bank of Nigeria (CBN), Mallam Lamido Sanusi will proceed on retirement leave effective April 1st 2013, two months to the end of his tenure.

Sanusi became the governor of CBN in 2009 after being nominated by then President, Umaru Musa Yar’Adua on June 1, 2009. His appointment was confirmed by the Senate on June 3, 2009. Hence his five year tenure is scheduled to end on June 3rd 2014.

Speculations have been rife that he has been forced to immediately proceed on retirement leave, but investigations by Vanguard revealed that Sanusi will still be CBN Governor till March 31st, and that his talked-about leave is not strange.

Director of Corporate Communications, Mr. Ugo Okoroafor told Vanguard he was not aware of the CBN Governor being forced to proceed on retirement leave.

A highly placed regulatory official, who pleaded anonymity however confirm that Sanusi is scheduled to proceed on terminal leave after March 31st, but said it was normal, and it is not true that the Governor is being forced to proceed on leave.

“It is a normal thing; some people go on six months, some on three months. So, there is nothing abnormal about it. You cannot force your Central Bank Governor to go on leave, it could damage the economy”, the source said.

Sanusi had in a chat with Bloomberg on March 24th indicated his intention not to seek second term as CBN Governor.

Sanusi said that he had intimated President Goodluck Jonathan way back in 2011 that he would not be interested in seeking second term in office on the expiration of the present tenure in June 2014. It is therefore not unexpected that looking for his successor would have started early enough to ensure a replacement is ready when Sanusi finally bows out.

“I informed the President way back in 2011 that I would not be interested in serving for two terms,” Sanusi told Bloomberg adding that “the job has been done, largely”.

It would be recalled that Sanusi called for early announcement of his successor, saying that the Federal Government should take a cue from the United States and announce the next CBN Governor three months to the expiration of his tenure.

“I think the issue of Bernanke and Yellen, if you remember, it started about two months ago and Bernanke ends in December. Tomorrow it will be six months to the end of my term, probably a bit early for the government to start talking about the next person. But I do hope that about two or three months before then, there should be some announcement.

“Central bank governors don’t comment on who they think their successor should be. It is not our business to do that, it is the President’s decision.

“But if I have input at all, I will try to encourage that we announce a successor two to three months before the end of my tenure so that everybody knows who that person is, what the views are and so people prepare accordingly. By the way, some of the names are out there in the newspapers and more can come out later,” Sanusi had said.

The three deputy governors of the CBN; Dr. Kingsley Moghalu, Mr. Tunde Lemo and Dr. Sarah Alade are all insiders who would ensure continuity, and the three stand a chance in becoming the CBN’s 11th governor. One should not write off the only woman in the running as she may well be favoured in a time when women are easily breaking into the top positions and are proving their capabilities. Sarah Alade may well be named the next governor of the CBN. 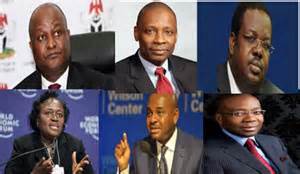