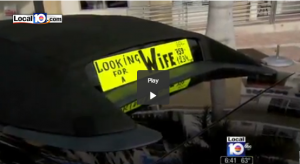 Looking for love in all the wrong places? Maybe it’s time to follow the lead of Alexander Gorbunov, who has chosen instead to let love find him — in his sports car.

For the past eight months, the 38-year-old Hollywood, Fla., man has sported a neon yellow sign in his BMW’s rear window which reads, “Looking for a wife,” followed by his phone number. He also drives a Hummer from time to time with a similar sign, a method he acknowledges is unconventional, yet effective.

Gorbunov told the Miami Herald he fields between 15 and 20 calls and texts a day, around 80 percent of which are serious inquiries. He’s hoping the sign will screen out women who don’t have a sense of humor.

Seeking to head off accusations he’s looking for the wrong type of woman, Gorbunov hastens to add he doesn’t respond to gold-diggers. If a potential suitor opens with questions about his car or his house, they don’t get a response, he told ABC News.

So far, the bold move hasn’t done much for him personally, but his wheels have helped hook up several of his friends, and his uncle, who has now been dating the same woman for the past seven months.

Ultimately, he told local news outlet WPLG, it has been fun for him and those he encounters: “When I see people happy, I’m happy too.”