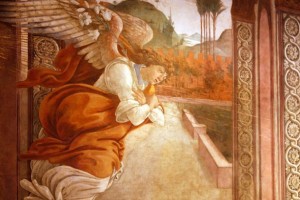 The Catholic Church says angels really do exist but they don’t fly about with feathered wings.

The Vatican’s resident angelologist, Father Renzo Lavatori says God’s helpers are more like shards of light than the depiction that straddles the tops of Christmas trees.

Father Lavatori says there is renewed interest in angels because of new age religions.

Speaking at a conference on angels in Rome’s Palazzo della Cancelleria, he said: “You do not see angels so much as feel their presence – they are a bit like sunlight that refracts on you through a crystal vase.”

The Catholic heavyweight was debating angels with the Italian Art Foundation, since the modern image of angels owes its origins to Renaissance paintings.

He said: “There is space for that, but you have to understand that these are not real representations. Angels do not have wings or look like cherubs.”

He is also an expert on demons and said angels are much needed to counter the devil’s imps.

He said: “There is a lot more interference from diabolical forces. That is why you see queues of people outside the exorcists’ offices in churches,” he said.

“Pope Francis talks more about the devil than about angels and I think rightly so. But it’s still early, he will get round to the angels too.”

Art historian professor Valerios Massimo Manfredi pointed out that angels were originally just God’s messengers and that the word “angelos” meaning messenger was used in this context in Greece more than 3,000 years ago.

Giovanni Tonucci, head of the Loreto Marian sanctuary said the image we have of angels allows artists to be creative.

“Angels have helped drive religious and philosophical thought and have given birth to sublime forms of poetic and artistic expression.”