A woman, Zenab Agbontine, has been arrested by men of the Edo State Police Command for allegedly axing her husband to death after a quarrel. 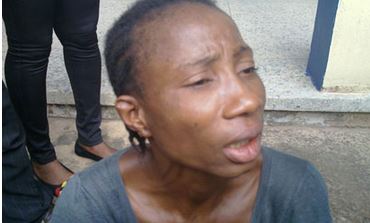 The woman was said to have used an axe to sever her husband’s head when the latter was asleep in their home at Ubiane Aviele village near Auchi in Estako West Local Government.
Narrating what happened, the suspect said she had been married to her husband for nine years and that they had five children.
Zenab, who was paraded yesterday, said she was a farmer and that her husband was a night guard.

She said trouble started when he brought another woman home and asked her to leave.

Zenab, who spoke in tears while confessing  said: “He stopped me from entering his room. I pleaded with him to forgive me because I had problems but he refused. It was when he slept that I entered the room with an axe and hit his head. I don’t know what entered into me.”

Zenab said her refusal to leave made her husband to beat her and that she retaliated when she got hold of an object. She spoke in tears.

Among other suspects paraded are Augustine Obodeke, who allegedly had carnal knowledge of his daughter and impregnated her twice, Udoh Effiong, who defiled a 48-year-old woman on her farm, Omoti Oshioremun and Emmanuel Umoru, who joined four others to defile a 12-year-old girl.

Police said Obodeke procured abortion for his daughter twice before the victim cried out.

Commissioner of Police Foluso Adebanjo said the suspects would be charged to court after investigation has been completed.