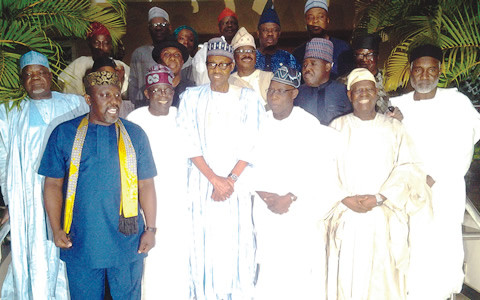 Governor of Osun State, Ogbeni Rauf Aregbesola has defended the recent visit by leaders of the All Progressives Congress (APC) to former President Olusegun Obasanjo and former Vice President Atiku Abubakar, saying it was a necessary move calculated to save Nigeria.

Aregbesola, who made this known in an exclusive interview with Sunday Trust, stated that the move was aimed at drawing “reasonable advice and intervention” that could save the country from disintegration.

It would be recalled the leadership of APC, comprising its interim national chairman, Chief Bisi Akande; former Lagos State governor, Asiwaju Bola Tinubu; and some APC governors, were led to Abeokuta, Ogun State by Gen Muhammadu Buhari (rtd) on a visit to Obasanjo. This came after a similar visit to Atiku at his Asokoro residence in Abuja.

The separate meeting with the two PDP card-carrying members was interpreted as a move by the opposition party to further deplete the ranks of the ruling party following the APC’s success in wooing five PDP governors into its fold.

But Aregbesola dismissed the notion, saying APC was not trying to woo Obasanjo and Atiku into its fold as it was being widely speculated, adding that the party was only consulting them to seek advice on how to stop the nation from breaking up.

He explained the fact that the two leaders are in an opposition party did not mean they cannot be partners in progress and that his party was not claiming to be the only one occupying a moral high ground that would not require it to look outward for advice.

“At the state we are in presently, sorry to say, we cannot be too puritanical. The worrisome situation with this nation has degenerated so badly and there is no time to start being puritanical. In this situation, what is too much to sacrifice to ensure that many Nigerians who do not accept the depth of maladministration, poor leadership and bad governance are mobilized to overcome the problem?” he said.

Aregbesola said APC was reaching out to Obasanjo and other Nigerians of like mind in the opposition in order to guarantee a future for the country.

“When this kind of dangerous situation occurs, consultation is imperative. Must we wait for disintegration and collapse of Nigeria before we consult with those who can still render reasonable advice and intervention that will save the country? Consultation does not amount to cultivation”, he said.

He likened what his party was doing to the happenings in other political parties around the world, saying: “What is happening in Nigeria tells you that politics is a game of infinite possibilities. The major opposition to the Christian Democratic Party in Germany was the Social Democratic Party; yet, the two of them are now together in the coalition that is ruling Germany.

“Liberal politics is a system of infinite possibilities.  The fact that some people could not agree yesterday should not be the basis for foreclosing a relationship tomorrow. What is most important is principle. What were the reasons for our disagreement yesterday? Was it selfishness or our inability to agree on how best to manage affairs or conditions? Those that we are relating with today were not with us because our own understanding of society and the leadership was different. If they have now come to our own understanding of what leaders should be and do, then we must embrace them.

“That is what is happening. The nation is in fermenting. And fermentation is a process that we leave all the properties in the process to dissolve and form a new thing.  I want to believe that Nigeria will come out of this and the weaknesses and deformities in each and everyone in this process will be eliminated and our finest capacity will be brought out for Nigeria to utilise for its greatness. That should be the focus of all.