Rivers State – The Divisional Police Officer (DPO) in charge of Special Area, with headquarters at Rumuodomaya, headquarters of Obio/Akpor local government area of Rivers State, Mr Akwuonu Allwell, yesterday escaped lynching when policemen attempted to disrupt a gathering of members of the All Progressives Congress (APC). 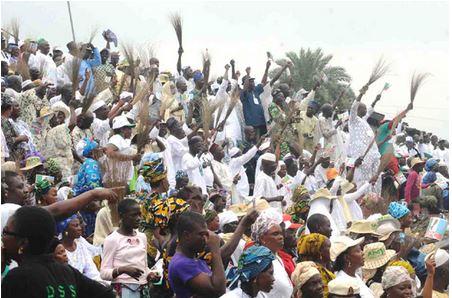 There was sporadic shooting at a rally organised by APC members at Okomoko, headquarters of Etche LGA of the state, despite the presence of heavily armed policemen at the venue.

Trouble started when Akwuonu, a chief superintendent of police, came to the rally organised by APC members in Ward 12, Obio/Akpor, at the Rumuigbo Civic Hall, saying that he had orders to prevent the rally from holding in the community.

Unable to convince the organisers of the rally, led by former member of the House of Representatives, Hon Ike Chinwo, on why the rally should not hold, the DPO, who was dressed in camouflage, left the venue and later returned with police reinforcement.

The police chief’s return to the venue of the rally angered members of the APC. They would have pounced on him but for the quick intervention of the Chief of Staff, Government House, Port Harcourt, Hon Tony Okocha, who pleaded with the APC supporters to spare Akwuonu.

It was observed that apparently sensing danger, the policemen, who came in three Toyota Hilux vans, began shooting into the air to scare the broom-wielding crowd and prevent them from descending on them.

The police, noticing that their shooting into the air did not prevent the APC supporters from advancing towards them, fled with their patrol vehicles into various directions.

Speaking to the crowd of APC supporters before the police invasion, Okocha, who is also an indigene of Rumuigbo community, said no amount of intimidation by security agencies will stop the people of the state, especially the supporters of Governor Chibuike Rotimi Amaechi from identifying with him.

He stated that the governor had left the Peoples Democratic Party (PDP) for the APC and would never return to the party.