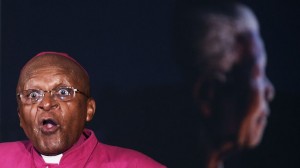 Burglars broke into the Cape Town home of South African peace icon Desmond Tutu when he was away speaking at Nelson Mandela’s memorial.

“I can confirm that there was a burglary last night,” said Archbishop Tutu aide Roger Friedman.

“We are not able to tell exactly what was stolen, the archbishop and his wife were not at home. The house was not pillaged.”

Archbishop Tutu had used the memorial to call on South Africans to follow Mandela’s example.

“I want to show the world we can come out here and celebrate the life of an icon.”
The timing of the incident is embarrassing for South Africa – the latest in a series of unflattering episodes to occur when the eyes of the world are on the country.

It is the second time in five months that Archbishop Tutu’s home in the Milnerton area of Cape Town had been hit.

In August, criminals broke into the home while the archbishop emeritus and his wife Leah were at home sleeping. The couple was unharmed.

So-called home invasions are common in South Africa and are frequently accompanied by violence.

Those who can afford it live behind high walls, electrified fences and with panic buttons that rapidly summon heavily armed private security guards.

He is still regarded as the voice of South Africa’s moral conscience.

Since retiring as archbishop in 2010, Archbishop Tutu has remained in the public eye, criticising the ruling ANC government and berating religious intolerance toward gays.

He is also well-known for his air of playfulness and humour.

Known fondly as “the Arch”, Archbishop Tutu once told AFP that most of his life had “been a bonus”.

He survived an illness believed to be polio as a baby, battled tuberculosis as a teenager and prostate cancer, with which he was diagnosed in 1997. [AFP]