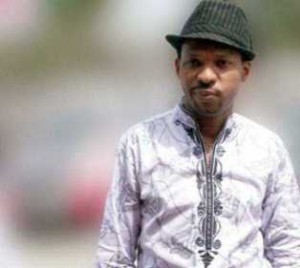 Let me start the story from the top.

The ceremony brought together celebs and people from over Naija especially Lagos, hundreds of people came around to witness the launching.

However, all didn’t go well for music icon and compere of the event Rotimi Martins, aka Alariwo of Africa, as he was thoroughly beaten by area boys.

Reports say that the problem started for Alariwo when he intentionally looked down on popular female musician, Bisola Oke aka Eleyele.

Alariwo intentionally ignored her presence even when he acknowledged the person seated next to her.

He worsened the already built up crisis by indicating that people who he did not recognise should send their names to him.

Immediately, Eleyele allegedly informed people sitting close to her that Alariwo has repeatedly behaved the same way to her. According to her, it was not his first time of ignoring her presence in event.

She equally disclosed that her problem with Alariwo kicked-off because she does not give him undue respect of addressing him as ‘brother’.

Meanwhile, what people inside the hall did not actually understand was how area boys hanging outside the venue got hint of Alariwo’s attitude towards Eleyele.

Alariwo concluded the event and stepped out unaware that area boys have laid ambush for him.

Reports say that Alariwo received hot slaps and thorough beating from every angle that he took off in search of the nearest building to take cover.