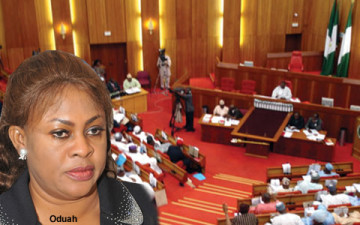 More troubles came for the embattled Minister of Aviation, Ms. Stella Oduah as the Senate on Tuesday rejected her explanation on the Associated Airline aircraft that crashed shortly after take-off on October 3 and asked her to re-submit a detailed presentation on the incident.

Oduah, who was initially scheduled to appear before the Senate Committee on Aviation alongside heads of the various agencies under her ministry last Tuesday but had her visit rescheduled following a minor incident involving a Saudi Airline cargo plane at the Nnamdi Azikiwe International Airport, Abuja, had limited her presentation to the information retrieved from the black box of the ill-fated Associated Airline plane.

The minister, who declined speaking to reporters after the exercise, had explained that the Accident and Investigations Bureau (AIB) began investigation and diagnosed the black box in the airport’s laboratory.

She also showed a two-minute video clip of the conversations between the two pilots, adding that both engines of the 23-year old propeller aircraft were faulty and should not have been cleared to fly.

The minister affirmed that the speed of the plane was not enough for the engine to take off and that the co-pilot warned that it should not take off but the captain, who was in charge of the flight, ignored the advice.

She said, “As the minister of aviation, the fact that we got preliminary report in our laboratory without waiting for the final report, showed that we have put in place preventive measures”.

She then went ahead to make a power point presentation which gave graphic and pictorial details of the state of the various airports in Nigeria and how her administration had been able to carry out a comprehensive overhaul of the sector.

But after listening to her over one hour presentation, the Deputy Senate Leader, Senator Abdul Ningi (PDP, Bauchi),  who represented Senate President David Mark,  said the minister’s explanation fell short of addressing the circumstances that surrounded the crash.

For instance, Ningi said the minister should come up, at another date, with details about the processes that led to the take-off of the aircraft on the fateful day, especially the names and positions of those whose responsibility it was to have alerted relevant agencies on its condition.