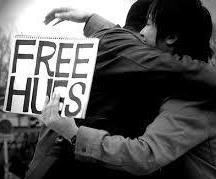 An Atlanta high school senior has been suspended for one year and won’t graduate on time after he hugged one of his teachers last month.

A video of the hug shows McNair putting his arms around his teacher and tucking his head behind her neck. The teacher reported that McNair’s cheeks and lips brushed up against her neck and cheek. He denies kissing the teacher.

“Something so innocent can be perceived as something totally opposite,” said McNair. “You know what someone’s going through. A hug might help.”

According to a discipline report, the teacher had warned McNair in the past that his hugs were inappropriate. April McNair, Sam’s mom, said if that was the case, she should have been informed.

“He’s a senior. He plays football and was getting ready for lacrosse and you’re stripping him of even getting a full scholarship for athletics for college,” April said.

“The school district should do a very good job communicating to both parents and students what appropriate contact is between students and teachers and to the extent that they have not done that it was an extreme punishment for the student,” Ages said.