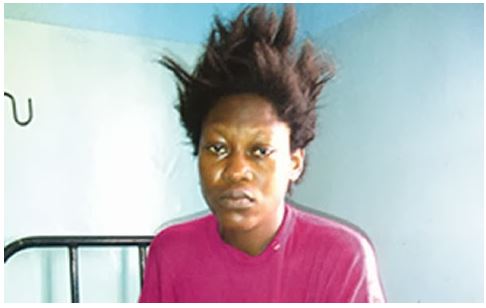 The Lebanese boss who allegedly beat up a pregnant factory worker, causing her to lose her 7-months pregnancy, has been arrested by the Nigerian police. Kaveh Noine, a manager with Toppan Printing Company located in Ikeja Industrial Estate, was arrested yesterday Friday December 27th in Kano where he fled to and was brought back to Lagos to face justice.

A pic of the woman who lost her pregnancy, Alexandra Ossai, above. She confirmed that Mr Noine had assaulted her several times during her short stay at the company and indeed kicked her in the stomach few days before she lost her pregnancy. Alexandra also said the Lebanese manager was in the habit of physically assaulting other workers whenever he felt they stepped out of line.

Not only will Mr Noine face justice for what he did to Alexandra, but the Lagos State government via the Lagos State Public Advice Centre, also wants to bring other assault charges against him. They plan to visit the company and talk with other workers and find out if more people were abused by him.
Source: Punch