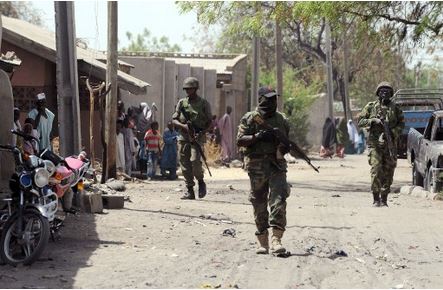 Seven fishermen were ambushed and killed in the first attack in Baga, a fishing community on Lake Chad in Borno state, while seventeen people died in a separate attack on the night from Thursday to Friday (Nov.27-28), when gunmen in pick-up trucks torched more than 100 shops and vehicles in the Sabon Gari area of the Damboa district, 90 kilometres from the capital of Borno state, Maiduguri.

There was no immediate confirmation of either attack from the military or local authorities. However, the following details emerged.

“They killed seven fishermen, injured 15 others and burnt some local boats and nets used for catching fish,” a fisherman, Ibrahim Gambo, said in Maiduguri, where he had brought his brother for treatment.

“It was a reprisal by insurgents because the soldiers have two weeks ago clamped down on them,” added another fisherman, Sheriff Bababa.

Attack in the Sabon Gari Area of the Damboa District

Insurgents suspected to be members of the Boko Haram Islamic sect invaded Sabon Gari village of Damboa local government area of Borno State and killed 17 residents and burnt down over 100 houses, shops, motorcycles and vehicles.

The Sabon Gari Main Market was also burnt down and property worth millions of naira destroyed. A report claims that the villagers killed two of the attackers with the assistance of some vigilante groups, while three others who fled to Damboa town were arrested.

A resident who did not want his name mentioned told that the terrorists invaded the community at 11.35 p.m. using several motorcycles and Hilux Toyota vehicles, and fired gunshots on fleeing residents, set houses, shops and vehicles ablaze. The attackers were chanting “Allahu Akbar” (God is great) as they arrived.

The violence lasted until about 4.00 a.m.

“As I am talking to you, I am parking out of this village with my family. I lost one of my uncles in the incident, and I have no reason to stay in this place again. The attackers said they will still come back to wipe out everybody next week,” one of the witnesses concluded.