President Goodluck Jonathan said he has approved the disbursement of N1 billion to the military for the upgrade of detention camps where suspected insurgents are held across the country. The President also explained how the insurgents attacked military and aviation facilities in Maiduguri. 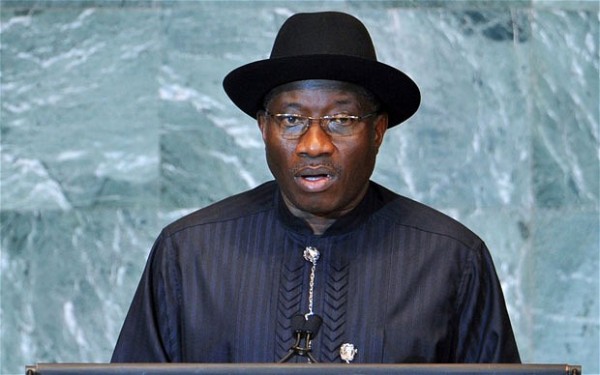 The President disclosed this during an interview in Paris, France, on December 6, 2013, Saturday, shortly before his departure to Nigeria at the end of a two-day summit on peace and security in Africa hosted by President Francois Hollande.

Mr. Jonathan said he gave the approval for the disbursement, following series of complaints by local and international human rights groups on the conditions of barracks which housed the detention camps.

He said he was specifically concerned about a human rights report on the situation of Giwa Barracks where some of the suspected Boko Haram detainees were kept.

“They were talking about some conditions in the barracks and because of that, not quite long, I released N1 billion to make sure that they expand the facilities in detention camps, particularly the camp in Giwa Barrack that they complained about.

“Boko Haram faithfuls that are arrested are being detained in some numbers of places and not only Giwa barracks.

“Following complaints that I received, about that particular barrack, I called the Chief of Defence Staff to go and use the army engineers to quickly expand and improve the facilities so that people arrested will live under normal human conditions,” President Jonathan said.

The President further stated that reports of human rights abuses by the Joint Military Task Force (JTF) were over-blown by the media, and most of the reported torture and killings were carried out by the Boko Haram group and not the military.

President Jonathan also noted that the state of emergency declared in Borno, Yobe and Adamawa States has greatly curbed the excesses of the Boko Haram.

“Before the emergency rule, even Abuja which is at the centre of the country was not safe. You could recall how the world became alarmed when the UN building in Abuja was bombed and even the Police headquarters in Abuja and a military market also were bombed; as well as a popular newspaper house.

“But with the declaration of state of emergency, we have been able to get to a point that our challenges are now in Borno State and Yobe State.

“Though, we are still having this issue of occasional attack, but definitely, the emergency rule has helped,” he concluded.

President Jonathan disclosed that the recent attack by Boko Haram in Maiduguri, which led to damage of five military aircraft by the insurgents, proved that the sect has international backing adding that the operations of the extremists had gone beyond the local militia group which it was earlier classified.

“…This last attack in Maiduguri, they came with about 15 to 20 Hilux vehicles and each of them was mounted with two to four rocket launchers. They were over 100 and some of them were carrying assault rifles and other weapons. The question then is that, where do they get the weapons?

“Definitely, these weapons cannot come from the locals, they are coming from somewhere,’’ he said, in reference to the attack that.

The President, who said that the government is already working on available clues to unmask the external supporters of the sect, appealed to the international community to assist the government in tracing the sources.

However, Goodluck Jonathan noted that government has not foreclosed the option of dialogue with the sect if that would end the insurgency. He added that while government will keep the lines of dialogue open, the military will continue to carry out its operations to protect the lives and properties of the citizens.

On the kidnapping of a French priest in Northern Cameroon and reportedly taken to Nigeria, the President said he was yet to receive a comprehensive report the issue.

“Though, we got the information, but I cannot give any categorical statement. But, we know that the tradition of hostage takers is mobility because when they are being tracked, they move,” he said.