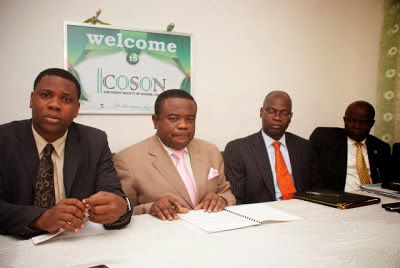 The Broadcasting Organisation of Nigeria (BON) has banned songs by mostly top Nigerian musicians from airplay, in protest of what they called ‘COSON’s attitude of antagonism and harassment, arbitrary levying on broadcast stations by the Copyright Society of Nigeria (COSON).

BON took the decision to ban the works of these musicians in collaboration with the Independent Broadcasting Association of Nigeria (IBAN).
The resolution by the two bodies yesterday, according to IBAN Secretary, Mr. Guy Murray Bruce, takes immediate effect.

COSON had taken several broadcast stations, hotels and other institutional users of musical works to court, and is known to have negotiated payment with many, including DStv, Silverbird and Cool FM among others.
The face off heightened after DAAR Communication and a few others were hit with litigation for similar claim.

But in a swift reaction, Okoroji, COSON boss, said his organisation has read with amusement the empty threat by the leadership of BON that its affiliate stations would no longer play the music of Nigerian citizens on Nigerian stations because Nigerian musicians are asking for their right to be paid copyright royalties for the exploitation of their music as is done in every country in the world.

He said he felt like weeping, adding that it is only in a country like Nigeria that this can take place with some people having no regards for intellectual property.