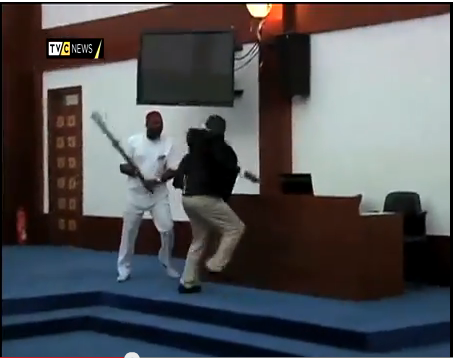 Twenty five members of the House of Assembly loyal to embattled Governor Rotimi Amaechi had met on the Assembly earlier today in compliance with a high court order barring the National Assembly from taking over the functions of the Assembly.

But the police suddenly began shooting teargas and live ammunition at the lawmakers who quickly took to their heels scampering for safety. It is not known yet whether anyone was injured.

The deputy speaker of the Assembly, Leyii Kwani, who presided over the sitting could not be reached for comments. But the state Commissioner of Information, Ibim Semenitari confirmed the incident.

She said, “It is an indication of the impunity ravaging the country and a clear indication that the PDP under the present leadership has lost all forms of democratic conduct.

They can’t even pretend to wear a mien of civility rather they are practising jackboot governance and repression worse than we have ever seen under the military.” Ms. Semenitari said she would issue a full statement on the incident later.