Many thought that that only logical choice for Time Person Of The Year would be NSA leaker Edward Snowden, but the magazine chose the popular new pope who has criticized modern capitalism. 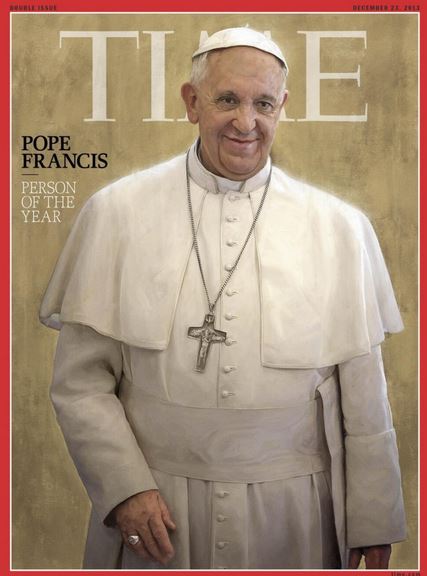 Once there was a boy so meek and modest, he was awarded a Most Humble badge. The next day, It was taken away because he wore it. Here endeth the lesson.

How do you practice humility from the most exalted throne on earth? Rarely has a new player on the world stage captured so much attention so quickly—young and old, faithful and cynical—as has Pope Francis.

In his nine months in office, he has placed himself at the very center of the central conversations of our time: about wealth and poverty, fairness and justice, transparency, modernity, globalization, the role of women, the nature of marriage, the temptations of power.

At a time when the limits of leadership are being tested in so many places, along comes a man with no army or weapons, no kingdom beyond a tight fist of land in the middle of Rome but with the immense wealth and weight of history behind him, to throw down a challenge.

The world is getting smaller; individual voices are getting louder; technology is turning virtue viral, so his pulpit is visible to the ends of the earth.

When he kisses the face of a disfigured man or washes the feet of a Muslim woman, the image resonates far beyond the boundaries of the Catholic Church.