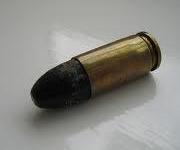 While Walter Santiago was driving after picking up his sick 13-year-old granddaughter from middle school, something flew in through the open driver’s side window and hit him in the head.

It turns out it was a bullet.

The Pasco County Sheriff’s Office believes the shot was probably fired from long range and that the bullet that struck the 62-year-old grandfather in the head just above his left temple came from a high-caliber handgun.

“Fortunately for me the bullet was losing velocity when it hit me,” Santiago said. “I feel very fortunate and very angry that this happened.” He received six stitches after the incident.

“It really is a case of unbelievable luck on the part of the driver,” said Pasco County Sheriff’s Office spokesman Doug Tobin. “He’s very lucky. Depending on where it hits him, it could kill him.”

Santiago has never had something like this happen before.

“I’ve lived in New York City, Connecticut and Puerto Rico,” Santiago said. “Nothing like this has ever happened. I don’t have any enemies that I know.”

The police do not believe that Santiago was a target.

“Just someone being stupid. If you want to kill someone, you’d get a lot closer,” Santiago said. “I don’t think careless is the word. Just stupid and ignorant. I certainly hope they catch somebody. If he continues doing it, he’s certainly going to wind up killing somebody.”