The National Agency for Food and Drug Administration and Control has apprehended a trader, Chijioke Nwagu, for allegedly manufacturing and selling counterfeit drugs. 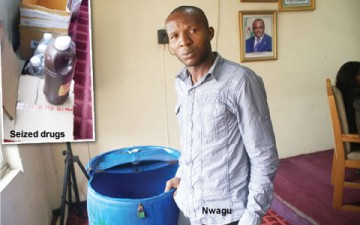 According to NAFDAC, the suspect, who lives on Elemijaye Street, Ajamgbadi area of Lagos State, carries out the illegal manufacture in the toilet of his two-bedroom flat where he mixes chemicals in a 200-litre drum.

The Director-General of the agency, Dr. Paul Orhii,  while briefing journalists in Lagos on Tuesday, said the suspect specialised in counterfeiting cough syrup.

He said, “Following an intelligence report and surveillance mounted at Alafia, Orile Iganmu, where Nwagu supplies counterfeit Tutolin with codeine cough syrup that he manufactures, operatives of NAFDAC intercepted and arrested one Uzodinma Odoemina with fake drugs

“Odoemina led investigators to Nwagu’s house where it was discovered that Nwagu carries out the illegal manufacture in the toilet of his house by pouring different locally-manufactured cough syrup of reputable companies into 200 litres drum and after mixing them, he then dispenses them into empty bottles and labels it as Tutolin with codeine cough syrup.

PUNCH Metro learnt that the suspect’s wife, Jane, who was at the house, was also arrested by the agency.

But the suspect explained that he did not plan on selling the goods in Nigeria, saying they were meant for export to Benin Republic.

He said, “I bought the packaging material of Tutolin with codeine from one Chibuike in China and the product was meant to be supplied to Benin Republic. In the course of my business, I met one Chisom Onwudinjo, who came to my house to see how I manufacture my goods in my house.

“He subsequently agreed to be my distributor and he also accepted that we will not sell the product here in Nigeria.”