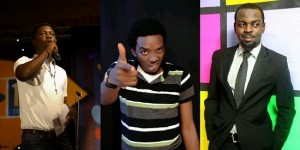 About a week ago, veteran Nollywood film maker and actor Charles Novia released a his list of what he claimed were the top 5 Nollywood actresses of 2013.

He has now released a second list of the men he believes were the top 5 Nollywood actors of 2013.

As controversial as this may seem to some people, I believe there are merits in recognising the names tied on this list on the number 5 spot. I could actually have chosen just one when it came to the crunch but decided to first and foremost acknowledge the input of these guys into the comedy genre of Nollywood , which is often overlooked when giving awards. Secondly, whether anyone likes it or not, these comedians do know.

HOW TO ACT. If within the comfortable ambits of their arguable stereotypes, they could elicit rib-cracking spasms from millions of Nigerians all the time, then their ART must be commended and rewarded. These three are judged on different individual skits released on youtube and other online platforms in 2013. Having watched those skits critically and also using the same criteria to judge their roles as with the other actors in this list, it should not come as a surprise that these guys scaled through in critical areas of delivery, characterisation and a huge dose of believability which induces spasmodic laughter. These comedians have a style of organic acting, peculiar to them which itself is an art form.
SEYI LAW, though known as a stand-up comic, moved steps furthed in 2013 with some commendable acting in the the ‘Orijin in Ibadan’ sketch on youtube. Seyi was adept as the effusive and garulous Yoruba mogul who gets more than he bargained for in a restaurant. Though mostly improvised, the skit shows acceptable reaction points from Seyi and a good transistion from the garulous to the gutted.
KELECHI J. UDEGBU may not be well known to many of you. In fact, I never knew him from Adam before I stumbled on his comedy skit on youtube and I was completely blown away. His role as the corrupt Officer Titus, a parody of some of our staple traffic enforcement officers, is as funny as it is as formidable. What struck me in Kelechi was his ability to internalise the character in such a way that the rendition of his lines and his projection of the character found a perfect and almost-believable mix. Actors can be judged on minute clips or performances and though this youtube skit is short, I predict that Nollywood will soon be seeing more of Kelechi Udegbu in no short time. There are few new talents out there who are endowed with an undisputed capacity to act comically. This gentleman is one of such.
BOVI UGBOMMA is a popular and lovable stand-up comic who has a television series, ‘THE BOVI UGBOMMA SHOW’. His body of work in 2013 is quite impressive and amongst many of such, I particularly judged him on the Rhythm Unplugged promo currently shown on Silverbird Television. Bovi brought a certain humour into that short sketch as he always does in his outings. Notice the transistion from his angry storm to the bouncer who touched his girlfriend’s bum to the last bit where he pants and tells her he took a short cut. Classic. Like I said, these comedians are actors in their own rights too.

Number 4: Blossom Chukwujekwu
Somehow, in 2013, Blossom came into the scene and perhaps asserted himself as one we all must take notice of.  I watched him in ‘Flower Girl’ in February 2013 at the cinemas and apart from an obvious on-screen charm, I could see that the young man put in a lot of work in his role. There was a certain energy he exuded in that movie which wasn’t lost on many. He isn’t just good looks. He seems to be eager to learn more and to prove himself beyond the ‘Fine Boy, No pimples’ looks. In ‘Flower Girl’, his internalisation was good enough and though there were small areas of artistic indecision when it came to delivery, Blossom overall gave a good account of himself. He found a better platform to excel in the movie ‘Finding Mercy’ where I saw marked improvements in his acting. His performance there was quite a cinema rouser for many, though his characterisation came to the fore after the first half-hour in the movie. His reactions were on point and he brought an emotional calibration to the whole movie in the last scene. Few budding actors have that ability. Blossom will certainly blossom in his career in 2014.

No 3. Odunlade Adekola
I don’t judge actors on whether they are in Nollywood or in ‘Yoruwood’ or any other ethnic coinage. There are certain qualities an actor in any category of the industry must have in assessing him. Personally, I think the Yoruba movies as well as the other ethnic movies have an advantage over the English movies in the areas of acting because the acting comes naturally to them unlike the English movies where more is needed to compete with the global parameters. However, this actor in the Yoruba genre of movies, Odunlade Adekola, has stood out in 2013. I watched a couple of his movies and he impressed me with his style, attention to characterisation, internalisation and a restrained attempt not to be melo-dramatic. In movies such as ‘Baba Super’, ‘Eje Nla’, ‘Fayebora’ and sneak peeks I saw of ‘Eje Fun Eje’, Odunlade showed class among or even above his peers. I don’t even understand Yoruba so it speaks volumes about how his acting made an impact on me. I am told that he is presently the biggest star in the Yoruba film sector. I can see why. Talent do not lie.

No 2: Ramsey Noah
It was tough putting Ramsey in the Number 2 spot because he is a damned good actor. Very good. Having worked with him in eight of my movies in the past, I know his abilities but I am yet to know his acting limitations. Over the years, Ramsey has explored his inner depths as an actor and tries to push the envelope. He comes across as one who takes his roles seriously and so he should. I watched him in three movies in 2013; ‘The Courier’, ‘Weekend Getaway’ and ‘Confusion Na Wa’. I think he particularly stood out more in ‘Confusion Na Wa’ where a mix of cinematography, directorial genius and a very good script brought out his sterling qualities in acting. But I believe Ramsey would stun us all in 2014 when Izu Ojukwu’s ’76′ hits the screens. From the short trailer I saw, there is something very dark and daring in Ramsey’s character in that movie. Aided with the retro feel in the movie as well as the costumes, one can sense an intensity in Ramsey’s character from the trailer. We are yet to see the best of Mr Noah. We have only seen the stirrings of a best.

No 1: O.C. Ukeje
No apologies to anyone. My Number One Actor for 2013 would be OC Ukeje. In arriving at this conclusion, I had the uncomfortable task of distancing his acting in my movie ‘Alan Poza’ from the list of other movies he was assessed with. But one cannot ignore that in 2013 alone, OC has won the ‘Best Actor’ diadem FOUR TIMES at the AMVCA, NEA, BON and NMA awards. He has also been nominated for ‘ Best Actor’  a record EIGHT TIMES in a single year. Now, that is enough to make heads turn and so they should. This is a feat even the older acts in Nollywood cannot boast of.
Watching OC Ukeje in three movies in the past year was a stunning experience. Since 2006 when OC won the top prize in the ‘Amstel Malta Box Office’ (AMBO), the young man had been relatively quiet and picky with his scripts, preferring to feature more in stage productions and promising scripts. That sense of purpose paid off in the long run. Like the Bible says, you can’t hide a light under a bushel. OC’s illumination in the acting space can be seen in ‘Confusion Na Wa’, ‘The Awakening’ and ‘Hoodrush’. In these movies, the power of his art can be seen. He has an unusual intensity as an actor and a peculiar propensity to project his characterisation which would leave many with gaping mouths. This young man has a lot to give to us in the nearest future. All we have to do is to receive.