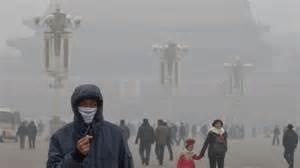 Chinese authorities have issued an orange alert as smog choked central and eastern China causing an increase in the number of people seeking treatment in hospitals for respiratory problems.

The alert was on Saturday raised from yellow to the second-highest level on China’s four-tier warning system for extreme weather, as the pollution reduced visibility to a soup, disrupted flights and caused many people to stay home.

“It stinks like smoke,” a woman in Shanghai said.

“The air really scratches in your throat. We’ve never experience such terrible smog.”

Jiangsu, Zhejiang, Anhui and Henan provinces have suffered smog for six consecutive days, the Xinhua news agency said, while other central and eastern regions have experienced three to five days.

Nanjing, Jiangsu’s capital, was under a red alert, and Shanghai has been plagued by high levels of air pollution after air masses carried industrial emissions from neighbouring Jiangsu and Zhejiang provinces.

Shanghai authorities on Friday halted all construction works and ordered children indoors as the financial hub suffered one of its worst bouts of air pollution.

Officials also reduced bus services by one-third and cancelled some flights to and from Shanghai airport.

The city’s concentration of harmful fine particles in the air reached 602 micrograms per cubic metre Friday, 24 times higher than the level considered tolerable by the World Health Organization.

By Saturday, the figure had fallen to 484 micrograms and then an “unhealthy” 186 by evening. Beijing’s index rose to a “dangerous” 459 by Saturday night.

Medical experts warned that the pollution could increase the risk of stroke and heart disease as well as cause respiratory
problems, birth defects and cancer.

“Smog and haze are largely attributed to the current development model,” Xie Zhenhua, deputy minister of the National Development and Reform Commission, was quoted as saying by the official Xinhua news agency.

“Manufacturers are concerned only with the growth of their production and ignore the environment,” he said.

Meteorologists said the weather was partly responsible for the abysmal air quality and predicted the pollution would likely continue until the end of the week.