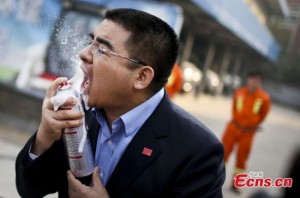 Chen Guangbiao, a high-profile Chinese millionaire and philanthropist, made headlines once again this week, after he sprayed liquid from a fire extinguisher into his mouth to show everyone that it’s non-toxic and completely safe. I’m pretty sure there’s a valuable PR lesson in there somewhere.

Chen Guangbiao, who you might now as the guy who sold canned fresh air last year, is no stranger to shocking PR stunts, but no one present  at his training center for disaster relief, in Nanjing, Jiangsu province, on Wednesday, expected him to go as far as spray fire extinguisher liquid into his mouth. Chen was there to promote some new equipment for disaster relief, when, in an attempt to show the advantages of his “green” fire extinguisher, he swallowed a hot curry and sprayed the small canister directly into his mouth to quell its burning effect. “Ok, it’s not the sort of thing fire extinguishers are made for, but it proves the point – that it is non-toxic and harmless,” Chen told reporters present on the scene.

Developed by Guangbiao’s company in Nanjing, this new type of fire extinguisher is apparently made of plant proteins, and while still as effective as conventional ones, it is completely non-toxic. The eccentric millionaire even boasted that the liquid can be used to wash the face and the mouth, as he elegantly demonstrated.

Chen’s stunt appears to have been very convincing, as one of the civilians in attendance at the promotional event said: “I gave it a go myself. It was not too bad, in fact it tasted a little herbal.”