Crazy: Kanye West Kicks Female Fan Out Of His Concert 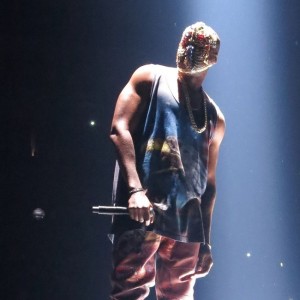 Someone really needs to check Kanye’s head if the brother is still sane.

Kanye West, 36, ordered a member of his security team to chase out a female fan from his gig in San Antonio, Texas, after she and a group of friends repeatedly screamed at him to take off his Maison Martin Margiela-created mask that covers his entire face.

The whole incident was caught on video and posted on Instagram by a fellow concert-goer, and the footage shows the ‘Blood on the Leaves‘ hitmaker becoming increasingly irritated by the fan’s demand as he approaches the crowd.

He said: ‘Now, you can see my face on the Internet, every motherf**king day. I came here, I open up a mountain…and you tryin’ to tell me how to give you my art.’

The rapper, who then performed a song explaining that he wears the mask so he doesn’t have to worry about unflattering photographs, later gave his bodyguard a hand signal to have the woman thrown out of the show, before he ranted: ‘Do I look like a motherf**king comedian? Don’t f**king heckle me. I’m Kanye motherf**king West. I’m dead f**king serious.’

Kanye’s reaction to the heckling comes just days after his fiancee, Kim Kardashian, surprised one of her Twitter followers by inviting her and a friend to join the reality star in the VIP section for Kanye’s concert inNew Orleans on Thursday night December 5, 2013.

The ‘Keeping Up with the Kardashians’ star sent her security to find the 19 year old fan after she tweeted: ‘I’m looking for Kim SO hard while we wait for Yeezy to come out. Wya sis? (sic)’