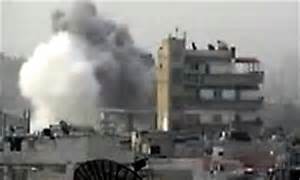 At least 56 people, including children, have been killed by Syrian army helicopters by dropping “barrel bombs” on the northern city of Aleppo, according to the British-based Syrian Observatory for Human Rights.

“The medics say they are removing people in parts; they aren’t sure how many there are,” Hassoun Abu Faisal, an activist with the group the Aleppo Media Centre told Associated Press news agency.

He said the bombs destroyed vehicles lining a main road and a two-story building, leaving a crater where part of the market was.

Activists said the airstrikes were carried out by government helicopters that dropped barrel bombs, crude devices filled with explosives and fuel that are wildly inaccurate but cause massive damage on impact.

The bombs are explosive-filled cylinders or oil drums that are often rolled out of the back of helicopters with little attempt at striking a particular target. They are capable of causing widespread casualties and significant damage.

Human rights groups have said that even if Syrian forces are targeting rebels with the bombs, they often explode in residential areas, killing civilians.

In the town of Marea, north of Aleppo, a barrel bomb that exploded near a school used by Syrians fleeing fighting in other areas killed three members of the same family, according to Abu Faisal and the Observatory.

Syrian officials have not commented on the air raids in Aleppo, the country’s largest city, and a major front in the war since the rebels launched an offensive there in mid-2012.

The city has been carved into opposition- and government-held areas.

An estimated 6,627 children have been killed within the past three years, a UN monitoring group believes.

More than 100,000 people have been killed in the conflict, in a war where no one seems to have the upper hand.