The Economic and Financial Crimes Commission, on Monday summoned 11 principal officers of the Kano State House of Assembly, including the Speaker, Alhaji Gambo Sallau, for questioning.

The summon was contained in a letter with reference number CR:3000/EFCC/KNZ/EG/TA/VOL.10/123 dated Monday 23, 2013 and signed by the EFCC Head of Operations in Kano, Ishaq Salihu.

The letter, made available to the News Agency of Nigeria in Kano, directed the Clerk of the assembly, who was also among those invited, to release the members for questioning.

It did not indicate clearly the issues being investigated, but the letter stated that the commission was investigating a case which “concerned the lawmakers”.

“In view of this, you are requested to release them (Officers) to interview the under signed at No. 2 Hajj Camp Road Kano today, 23 December 2013 by 10:00 am prompt”, the letter said.

Those invited were the speaker, his deputy, the Chief Whip, Deputy Chief Whip and Majority Leader.

A reliable source at the EFCC office in Kano told NAN that all the affected officers had been moved to Abuja for further questioning. (NAN) 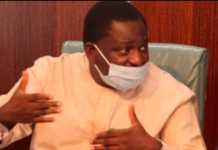