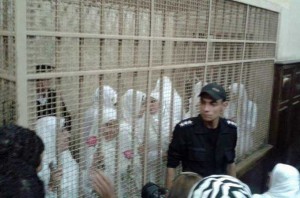 Fourteen Islamist women jailed for 11 years for a peaceful protest in Egypt will be released after a court slashed their sentences in a case that had outraged opposition groups and human rights campaigners.

Seven girls aged under 18 had also been sent to juvenile prison in the same case last month for obstructing traffic and damaging property during a pro-Islamist protest in October.

An appeals court in Alexandria on Saturday reduced the sentences of the 14 women to one-year suspended terms, while a juvenile court put the teenagers on probation for three months.

Once the paperwork is completed, they will all be released.

His supporters have staged frequent protests calling for his reinstatement.

The army-backed authorities accuse the Brotherhood of violence and terrorism. It denies the charges.

Hundreds of Morsi supporters have been killed and thousands arrested and Morsi and other Brotherhood leaders are on trial for inciting violence.

Gamal Eid, a human rights activist, said the sentences against the female protesters had been politically motivated.

“There is no independent judiciary in Egypt,” he told the Reuters news agency. “They (the judges) were looking at the girls’ background instead of their actions. Now they have tried to fix the first decision and it makes more sense.”